Reservists give up their spare time to serve in the Reserve Forces, balancing their civilian life with a military career to ensure that should their country require them, they would be ready to serve as part of the military.
The Reserve Forces make up approximately one sixth of our Armed Forces personnel and as such are integral to protecting the nation’s security at home and overseas, particularly providing capability in specialist areas such as medical and cyber. 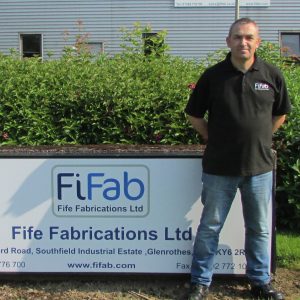 Civilian Employment:
Current Position: Programming Engineer.
Joined FiFab as a production operator in 1991 worked in various departments within the production team before moving into the quality department where I spent 5 years before moving once again to join the Engineering team where I am part of the programming team. 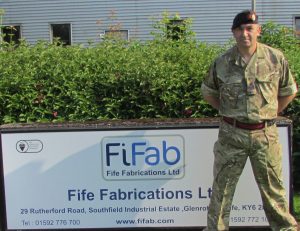 Reserve employment:
Current Position: 239 Sqn SSM
Having initially joined the reserves in 1987 and spending 4 years with 231 Sqn RLC (V) until work commitments meant I could no longer fulfil my commitment. I re-joined what was THE SCOTTISH TRANSPORT REGIMENT (now 154 REGIMENT RLC ) in 1997. Deployed to Iraq in 2003, Employed as Comms Troop SSGT at Present until I take up my new post as SSM for 239 Sqn RLC based in Dunfermline.

FiFab thanks all the reservists for keeping us safe and also their support during the Covid 19 crisis.

Fife Fabrications have many key workers working tirelessly through these ...

Today we all find ourselves in unprecedented territory as a result of the ...

Discover how we make the difference

Get in touch to discuss your requirements

TALK TO US TODAY